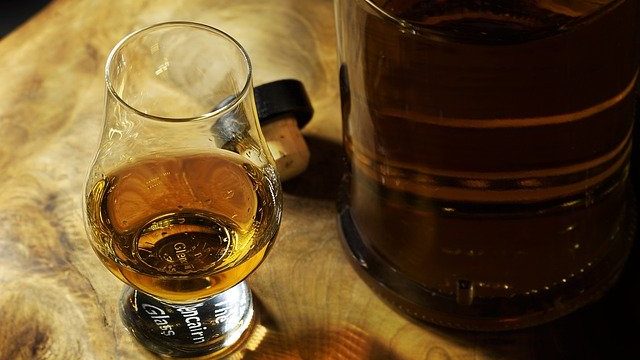 Whiskey is one of the most popular alcoholic drinks in the world, especially in Ireland, where it’s known as “the water of life”.  Bourbon and Scotch are the two most consumed types of whiskey. They are very similar, but there are also many differences, as any whiskey fan will tell you. Let’s jump into the main differences between Scotch and bourbon…

Difference Between Bourbon and Scotch - Overview

The main difference is the way that they are made. Scotch is made from fermented grain mash, whereas bourbon is made from corn mash. Both types of whiskey are aged in barrels before they can be sold to consumers.

As we mentioned above, bourbon is made from corn mash. However, there’s a twist in this tale, as bourbon must be produced in USA to be called bourbon. The distilled alcohol must have more than 51% corn and be aged in brand-new oak barrels. Law dictates that these barrels can only be used once. Any bourbon that has age for less than four years must state so on the bottle’s label. As you can tell, the laws are very strict when it comes to bourbon.

Scotch is made from malted grain (mainly barley). Like bourbon, Scotch can only be made in one country. However, the country of origin for Scotch is… you guessed it… Scotland! You can find two types of Scotch whiskey, which are known as single malt and single grain.

Single malt Scotch only contains water and malted barley. It is produced at just one distillery. Single grain Scotch contains other grains that can be malted or unmalted.

It is required for Scotch to age in oak barrels for at least 3 years. Both types of whiskey are distilled with 40% alcohol / 80 proof.

When comparing the nutritional value of bourbon and scotch, the two are exactly the same. You will find 97 calories and 14g of alcohol in a standard 43ml shot of bourbon or Scotch.

Although they contain the same number of calories, the two are made from different materials. Scotch is made from a range of malted grain, whereas bourbon is made from grain mash with over 51% corn.

This difference gives bourbon a sweet taste profile, even though it has the same number of calories. As such, bourbon is perfect for those individuals who are trying to lose weight, but have a sweet-tooth.

There are some possible benefits to drinking whiskey. Here are the main ones:

Although drinking a glass or two of whiskey can provide some benefits, the negatives of excessive drinking are well documented. Here are just some of the reasons not to overindulge:

The best way to reduce these risks is to limit your consumption of bourbon and other alcohols. Experts recommend no more than one drink (43ml) for women or two drinks for men (86ml).

How to Enjoy Bourbon?

There are multiple ways to enjoy the delicious drink known as bourbon. Most individuals enjoy drinking bourbon straight from the bottle, which is known as having it “neat”. It is recommended to have at least one glass of neat bourbon, so that you can experience the true aroma and flavor of the bourbon.

After you have tried your bourbon straight from the bottle, you can experience with adding a few drops of water or ice. Doing this is known to bring out the more subtle flavors of the bourbon. If you’re not a massive fan of the flavor, or it is too alcoholic for you, then adding a mixer is a good idea. My favorite bourbon mixer is ginger ale.

You could even try adding your bourbon to a well-known cocktail! Here are some popular ones:

These cocktails are delicious, but please note that they are very high in sugar and calories.

So that’s the main differences between bourbon and scotch whiskey. They are similar alcoholic drinks, but people do have their preferences. Some love bourbon, some love scotch, while some love both (like me).

You will find 97 calories and 14g of alcohol in a standard 43ml shot of bourbon or Scotch. Although they contain the same number of calories, the two are produced in a different way.

To summarize, Scotch is made from malted grains, whereas bourbon is made from corn mash. Bourbon must also have been produce in USA to be called Bourbon, whereas Scotch should be made in Scotland.